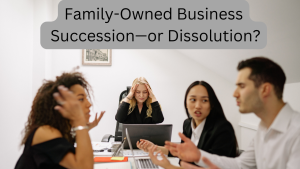 They make great stories when they’re successful, but maintaining continuity of family-owned businesses from generation to generation presents many challenges.  A family-owned business can be an excellent means of transferring and preserving generational wealth when run smoothly. Learning to work together as a family can benefit everyone and the business.

But many families just don’t get along, and those internal familial problems have a way of working themselves into the operation of the business.  When that happens, family members inevitably look to their attorneys for guidance, and at that point litigation may be the only option.

But most don’t sustain themselves, according to Business Week, which has reported that just 40% reach the second generation, 13% get to a third and 3% are passed down to a fourth generation or beyond. The average life span? Just under a quarter-century (24 years), according to familybusinesscenter.com.

Why is that? Cornell’s research identifies lack of succession planning as one cause. Nearly one-third (30.5%) of owners never plan to retire, while about the same number (29.2%) say retirement is more than a decade away; to make matters more tenuous, nearly one-third (31.4%) have no estate planning in place other than a will. (For a deeper dive into the research, please click here.)

HOW TO AVOID PROBLEMS:

The best way to avoid problems is to discuss management issues when everyone is amenable.