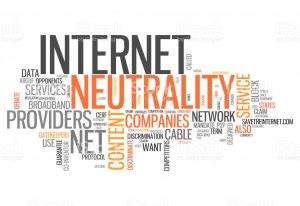 The Federal Communications Commission will vote December 14 on whether to repeal so-called “net neutrality” rules.  Those in favor of the current rules, established in 2015, say this would mean a playing field tilted toward those with money to pay Internet service providers for rapid content delivery speeds, giving them a fast lane to consumers’ desktops, tablets and phones.  What would that mean for small businesses?

The plan, put forth by current FCC Chairman Ajit Pai and supported in writing by the two other Republican appointees on the five-person commission—thus making its passage likely—would reverse the Obama era decision classifying Broadband Internet Access Service (BIAS) as a telecommunications service. Instead these providers—which include wired telephone companies, wireless carriers and cable television service providers—would be reclassified as offering information services.

The 2015 classification, which received a 3-2 affirmative vote in the then-Democratic-controlled FCC, was affirmed in June 2016 by the U.S. Courts of Appeals for the District of Columbia Circuit. In declaring broadband providers as telecommunications services, the FCC promulgated rules that stopped providers from blocking access to content and applications, slowing the speed with which users could access content, and charging fees to those willing to pay to have their content disseminated more rapidly.

In switching the official designation of broadband providers to information services, the FCC would remove all of those restrictions while keeping a 2010 “transparency” rule that required providers to reveal their practices to their customers, to providers of Internet content and applications, and to the FCC. The plan also would prohibit states from establishing “net neutrality” regulations of their own.

Those who support the current “net neutrality” rules believe they are needed to ensure that consumers can easily and equally access content and applications of their choice—and, conversely, that providers of content who lack deep pockets, including small businesses, can compete on a level playing field in dispersing their content online. Those who favor the rules change say the current regime has been heavy-handed and stifled investment.

The switch to the new regime would put the Federal Trade Commission in charge of protecting consumers from unfair, deceptive and anti-competitive Internet service practices, as well as protecting consumer privacy—yet it’s not clear that the FTC can enforce such protections against broadband providers, as the Federal Trade Commission Act precludes the agency from doing so against entities considered to be “common carriers.”  Many broadband providers could be defined as such, adding another element of uncertainty and confusion.

Chances are, the FCC’s decision will once again be appealed, and while appeals courts often offer agencies like the FCC wide latitude in making determinations within their clear purview, the agency will need to justify reversing course on what it declared so confidently two years ago—and successfully defended just last year in the D.C. Circuit.

Whatever happens on December 14, small businesses that rely on their websites and social media to reach and keep up with customers, especially those who provide streaming video and other heavy-bandwidth content, should make sure they’re up to speed on the latest developments.