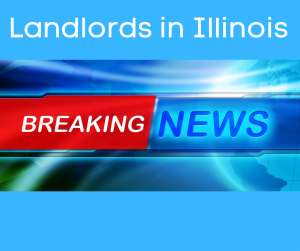 Landlords in Illinois, especially those in non-home-rule portions of Cook County, will face a raft of changes this spring in the wake of three state Supreme Court orders issued in late February, and a new ordinance passed by the Cook County Board of Supervisors that takes effect June 1.

The Supreme Court’s orders respectively relate to Governor Pritzker’s eviction moratorium, which has been extended to April 3; how circuit courts can handle an anticipated flood of eviction cases once the moratorium ends; and the use of electronic signatures in eviction proceedings during the COVID-19 pandemic.

The eviction moratorium-related order reaffirms several provisions from a December, 22, 2020, order stipulating that evictions can proceed only if tenants haven’t shown they are a “covered person” under the governor’s order or that another exception applies to their case, and if a judge thus determines the case qualifies to be heard. The order also confirms that landlords receiving any new grounds for evictions and actions dismissed without prejudice under the order can be refiled for no fee once the executive order ends.

The April 3 order also contains two new provisions. The first holds that an eviction can’t proceed against a “covered person” who doesn’t owe rent unless they are shown to pose a threat to the health and safety of other tenants, or to the property itself—and not for reasons like the breach of a lease term. Secondly, landlords are now able to challenge a declaration that the tenant is a “covered person,” which will make it easier for some cases to move forward.

Once the governor’s moratorium ends, a second Supreme Court order issued in February says that judicial circuits are “authorized and encouraged” to roll out alternative dispute resolution processes—whether in person or online, whether voluntary of mandatory—to handle the anticipated panoply of cases that will be queued up and ready to be filed.

The third and final order simply says that courts will accept any digitally signed document that hews to the standards set forth in the Electronic Commerce Security Act and the court’s own previous declarations on the subject, which were promulgated in 2017.

The tenant-landlord rights ordinance unanimously approved by the Cook County Board will cover nearly 250,000 suburban households who rent properties in areas of the county that are not subject to home-rule provisions—meaning it does not apply to Chicago, Evanston, Oak Park and certain other suburbs that have their own similar ordinances already on the books, unless they decide to repeal their ordinance in deference to the county’s.

The Cook County Residential Tenant and Landlord Ordinance immediately prohibits landlords from locking out tenants prior to providing proper notices of evictions while simultaneously guarding against destruction or abandonment of property. Further provisions that will take effect on June 1 include a standardized eviction procedure, guidance on how tenants can ensure they will receive their security deposit back, and limits on late fees that landlords can charge—$10 per month for the first $1,000 in rent and 5% thereafter.

The ordinance excludes a number of different types of properties from its provisions, including owner-occupied buildings of six units or less, as well as a single-family home or condo that is the owner’s only rental property, and in which the owner or an immediate family member has lived within the past 12 months. Others include hotels or motels, medical facilities, religious institutions, temporary shelters, cooperative apartments, and units granted to those who work for the landlord as part of their conditions of employment.

Importantly, however, landlords whose property is excluded from the ordinance must “prominently” say so in their marketing and application materials prior to moving forward with even the application and fees associated with a lease. And some landlords are concerned about other types of “gotcha” provisions that could trap unsuspecting, especially smaller-scale property investors who are trying to be on the up-and-up but miss certain requirements.

So it’s best that landlords consult with their attorneys to get up to speed on these provisions before June 1—and also to understand better how the Supreme Court orders impact them.