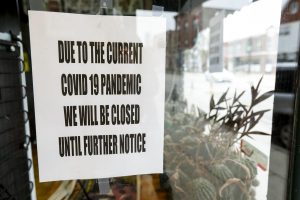 Should business interruption insurance cover losses due to the COVID-19 shutdowns, even if said insurance policy contains a virus exclusion?

A bar and restaurant based in Park Ridge and a former jewelry store in Chicago have gone to the U.S. 7th Circuit Court of Appeals to argue that their policies with West Bend Mutual Insurance Co. should cover such losses, which they say are due to the Illinois state government orders, not the virus itself. (Mashallah Inc. et al. v. West Bend Mutual Insurance Co., U.S. Seventh Circuit, 21-1507)

In its filing with the Seventh Circuit, West Bend has argued that’s a distinction without a difference and that furthermore, the two businesses have failed to show any “direct physical loss of or damage to property,” which the carrier asserts that courts throughout the nation have found cannot be claimed under government shutdown orders.

“Although COVID-19 is unprecedented, it does not change the terms of the policies,” West Bend writes. “Plaintiffs did not pay for or obtain a guarantee of income. … As plaintiffs themselves allege, the closure orders were issued ‘in an effort to slow or stop the spread of COVID-19.’ There was no genuine dispute that the closure orders were issued in direct response to COVID-19 and would not have been issued but for COVID-19.”

The insurer points out in its response to the appeal that Ranalli’s did not lose access to its property and was able to continue takeout and delivery options, while the jeweler was still able to conduct basic operations. And West Bend said it reminds policyholders time and time again about the limits of their coverage and thus did nothing deceptive.

The two businesses have claimed that the lower court was incorrect and that they suffered direct physical loss or damage because the state-mandated orders are what led to their significant revenue losses. In its filing, Ranalli’s said it had sustained at least $350,000 in losses between March and May 2020, while Mashallah had lost $68,000. Both businesses are suing for an additional $50,000 in penalties for the bad faith claim.

In their appellate brief, the plaintiffs argue that the lower court incorrectly ruled that the virus was the “dominant cause” of their losses, and that this conclusion was not “clear and free from doubt,” which they assert are the burden that must be proved under Illinois statute.

“To accept this decision is to rewrite well-established Illinois law and relieve insurers of their high burden to enforce exclusions, with devastating consequences for Illinois policyholders,” they write. “Additionally, the District Court erred by making additional findings of fact in Defendant’s favor on Plaintiff’s class claims for unjust enrichment and ICFA violations. This is not Illinois law and the District Court’s decision must be reversed in its entirety.”

The Seventh Circuit’s ruling will have precedential impact on similar cases filed by small businesses in Illinois, Indiana and Wisconsin. Stay tuned as cases which claim loses due to mandatory COVID closures wind their way thru the courts. This is not the last we will hear about these cases.