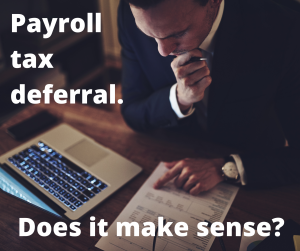 The Dangers of Payroll Tax Deferment

As part of a series of executive actions rolled out in early August, President Trump ordered Treasury Secretary Steven Mnuchin to allow the deferral of the 6.2% payroll tax on employees from Sept. 1 through Dec. 31 for workers making less than about $104,000 on an annualized basis.  The plan was brought forth by the White House after it became clear that Congress did not plan to play ball with the President and pass an actual payroll tax cut.

After a hard look at the plan, it is obvious that small business owners should not be tempted by President Trump’s offer to defer paying some employee payroll taxes until next year.    Established through a non-binding Presidential Memorandum, this offer does *not* constitute a tax cut.

It’s just a deferral of the taxes that lets employees hold off on paying their portion of Social Security (but not Medicare) taxes (levied at 6.2% of income) from now through the end of the year.  But the plan then essentially requires those opting into the plan to pay double the amount to make up the difference between January and April of next year with interest beginning to accrue on the 1st of May 2021.

Trump’s offer is good for any employees who earn less than $4,000 in a bi-weekly pay period, or the equivalent amount in a different length of pay period (roughly $100,000 or less annually), and employers must determine who is eligible each pay period.

Employers are not required to take advantage of this deferral, nor can employees legally force them to do so through the courts.  But employers do remain obligated to pay the taxes between January and April of next year – even if an employee has been laid off by then and socially distances himself or herself from coughing up the deferred amount.

From a small business owner’s standpoint, if you defer the payroll taxes for everybody, employees all could face a sudden lump sum tax payment next April.  For example, an employee making $35,000 per year would owe more than $750.  If you let employees decide individually, that could create an administrative headache for your accountants.

As a matter of public policy, the employees who are most likely to bite on the extra cash flow – those scraping by paycheck-to-paycheck – are going to be hit the hardest by the double-taxation in early 2021. The deferment could lead to a temporary $100 billion shortfall in the Social Security Trust Fund – although it might not be temporary if anyone in Washington takes seriously the language in Section 4 of the President Memorandum that covers “tax forgiveness.”   That reads, in part: “The Secretary of the Treasury shall explore avenues, including legislation, to eliminate the obligation to pay the taxes deferred pursuant to the implementation of this memorandum.” So maybe some hopeful souls will think gee, maybe I could get away with not paying this at all.

But let’s remember your mother’s old nostrum about, “If it sounds too good to be true … ”   Because in this case, “it” would lead to much sooner, larger shortfalls in the Social Security Trust Fund than anyone has ever seriously predicted.   Given all of these factors, it’s no wonder that the U.S. Chamber of Commerce predicted most members would likely decline the offer and stick to the payroll tax status quo.  CNBC has thoughtfully addressed the issue here: President Donald Trump’s payroll tax deferral raises issues for businesses and employees.

For the sake of your business and that of your employees, your business should  not take the bait on this plan and take a hard pass.