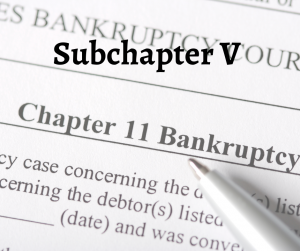 For the past two years, small businesses whose bottom lines were impacted by the onset of COVID-19 enjoyed greater protections while going through Chapter 11 bankruptcy reorganizations in the form of higher debt limits under the Small Business Reorganization Act.

That act, passed in August 2019 and enacted as of February 2020, established what came to be called “Subchapter V” of the SBRA, aimed at providing a simpler, less costly and ultimately more beneficial Chapter 11 process for small business debtors who would struggle to afford administrative and other costs.

Initially, to be eligible, a small business could have no more than $2.7 million in aggregate, non-contingent, liquidated secured and unsecured debts. But a month after the SBRA was enacted, Congress passed the Coronavirus Aid, Relief, and Economic Security Act (CARES Act), which among many other provisions temporarily boosted that limit to $7.5 million—for a year. Then, under the COVID-19 Bankruptcy Relief Act of 2021, the $7.5 million was extended a second year—ending March 27, 2022.

“Subchapter V has brought about significant changes to business restructuring and creditors’ rights, particularly in light of the expanded eligibility to qualify as a ‘small business debtor,’ ” according to the National Law Review. “Indeed, Subchapter V has steadily grown as a percentage of commercial Chapter 11 case filings over the past two years and, if the proposed legislation is enacted, that trend is likely to continue.”

While there was some speculation Congress might further extend that expiration date, March 27 came and went with no further action, as the country overall appeared ready to move on from public health and economic relief measures associated with the pandemic, with hospitalizations and deaths dropping rapidly since the end of the omicron spike this winter.

But further relief for small businesses going through Chapter 11 might be coming, and this time it would be permanent.  The Senate on April 7 passed the Bankruptcy Threshold Adjustment and Technical Corrections Act, which among many other provisions put the $7.5 million limit back into effect—and this time with no time limit.

And however much the country is ready to move on from the pandemic, there is no question that supply-side and labor challenges, as well as inflationary spirals, continue to plague some small businesses.

The overall number of bankruptcy filings rose 33.5% in March over February, according to Reuters, although the first quarter overall was down 17% over a year prior, and the bump might have been due to those hurriedly filing before the March 27 cutoff (a similar jump happened in March 2021 before the limit was extended).

And while the debt limit to qualify for Subchapter V saw a modest increase to just over $3 million on April 1—an automatic bump included in the original SBRA—there is no doubt that some could use greater relief.

The House of Representatives introduced the Senate bill (S. 3823, H.R. 7494) on April 11 and referred it to the Committee on the Judiciary. Stay tuned … or maybe write your congressperson.

But the important news for small business owners is that there is a more economical way to get debt relief than the expensive alternative of a Chapter 11 Bankruptcy Filing.