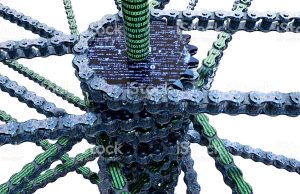 Should your small business be dealing in the online currencies (“cryptocurrencies”) like Bitcoin? What are they, anyway, and what are the risks and benefits?

Bitcoin is what’s known as a “cryptocurrency,” a digital coin that buyers and sellers of goods and services can use to undertake transactions over the Internet such as restaurant bills and tuition fees. Bitcoin is not the only such cryptocurrency—Ethereum is another example—but it’s probably the best known.

One acquire Bitcoins in one of several ways: as payment for goods or services, by purchasing them at a Bitcoin exchange, by exchanging them with a willing partner, and through what’s called competitive mining, which involves using special software to solve math problems. They are stored in one’s encrypted online “wallet” and transmitted via a “blockchain” when a transaction is consummated, assuming the price of the good or service does not exceed the buyer’s available balance. One can convert Bitcoins to cash if another party agrees to buy them.

Bitcoins are becoming a tempting investment because they have increased in value rapidly – the price has risen from under $1,000 in late March to more than $6,500 as of November 1, the market cap from $15.4 billion to more than $100 billion during that same period, while daily transactions have fluctuated between about 200,000 and 350,000.

Although such digital currencies are growing quickly in popularity, questions have arisen as to whether they are truly a currency or more of a bartering-type commodity, and how they will impact the global market. To date, nations’ regulatory stances are mixed—Japan has classified them as a payment method, for example, while the U.S. sees them as commodities, and the European Union has not passed legislation defining their status.

In addition, the Court of Justice in the European Union exempted Bitcoin and other cryptocurrencies from the Value Added Tax, ruling in Skatteverket v. David Hedqvist (Case C-264/14) that exchanges of Bitcoin for regular currency represented a supply of services.

This mix of responses could well slow the growth of Bitcoin and other cryptocurrencies and therefore, their intended benefits. Regulators will first need to sort out whether these online currencies come closer to a regular national currency or a speculative asset, in which case they should be regulated like securities.

There is a battle waging over which cryptocurrency will win the war and that is yet to be determined. And regulators across nations will need to come to a consensus for cryptocurrencies to ever gain successful global utilization. There is much distance to travel before this happen; in fact, some countries have reacted to the development by banning trade in cryptocurrency.

But small business owners in Illinois need not become too wrapped up in this debate. Bottom line, Bitcoin represents too great of a risk for them, precisely because it’s so highly unregulated and presents a level of volatility and fluctuations in value too high for those operating on narrow margins to account for adequately.

Another risk involved is cybersecurity and the threat of “phishing” and ransomware coming your way if an employee clicks on the wrong e-mail, whether accepting Bitcoin payments or in any other context.  Hackers can effectively “lock up” your server and demand money—i.e. ransom—in exchange for unlocking it, which can be quite costly, wiping out whatever modest gains you have received from being open to trading in Bitcoin, and then some.