Purchasing and flying a drone might seem like either a fun diversion or a new way of doing business.  Professionals who do photography and videography, agriculture, weather forecasting, and increasingly construction are putting drones to commercial use, while they’re being piloted for package delivery through companies like Amazon and UPS. 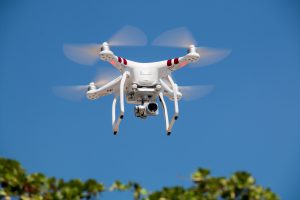 Legal issues regarding flying of drones.

Whatever use you have in mind for a drone, make sure you fully investigate federal, state and local laws on the subject, starting with those handed down a few years ago by the Federal Aviation Administration. For starters, drones being used for commercial purposes that weigh less than 55 pounds must have an Airworthiness Certificate, and the operator must have a Remote Pilot Airman Certificate.

The FAA also prohibits commercial drones from flying over people not involved in their operation, or under a covered structure of any sort. They must in the pilot’s line of sight at all times and cannot be operated at night, defined as anytime more than a half-hour after sundown or before sunrise. Airspace near airport and public events is restricted, and drones cannot fly more than 400 feet high or more than 100 miles per hour.

The majority of state legislatures have taken action regarding drones, and more federal and state laws and regulations are surely coming. In Illinois, the legislature has allowed law enforcement personnel to use drones with a warrant in the event of a terrorist attack or other potential harm to human life, including the imminent escape of a suspect.

Other state legislation in Illinois has loosened regulations around law enforcement’s use of a drone during disasters or public health emergencies, and, on an oddly specific note, prohibited the use of a drone to interfere with hunters or fishermen. (Not that they shouldn’t be protected, but why them and not triathletes, or street performers?)

Beyond what’s actually been codified, the use of drones can lead to litigation on a number of fronts, if operators push the boundaries of common sense—and common law. For example, the right to privacy generally holds that one cannot capture and use images of people or private property, without written permission from the subject or owner. So it’s important to gain that permission if you wish to do so.

Another area of concern is trespass laws, which historically have applied to physical entry onto the grounds or structures of a property. Those are being construed to extend to “aerial trespass” in the airspace below federal regulated heights for aircraft, with regard to drone operations.

Although laws and regulations governing workplace safety under the Occupational Safety and Health Administration (OSHA) do not specifically mention drones, they would apply to any job site operation and should be kept in mind. Other issues include federal and state laws on recording employees in the workplace, as well as trade secret and intellectual property rights if you’re capturing images or data.

None of this is meant to persuade you not to purchase and fly a drone, whether for business or pleasure. The number of registered drones in the U.S. has tripled to more than 1.3 million over the past few years, and there are now well over 100,000 registered operators, so you will be in good company. But that means laws and regulations no doubt will continue to evolve. So look at them before you leap into piloting a drone.

Oh, and one other thing – make sure you don’t accidentally pilot your drone too close to Iranian airspace. You never know what might happen.