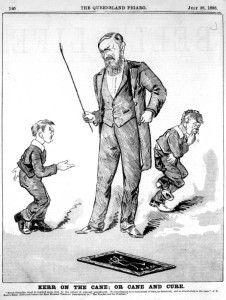 The most vexing challenge would seem to be distinguishing between child abuse and a strict child rearing philosophy.  That  requires taking Peterson’s intent into consideration.  We can’t ultimately know what his motives were, but there is evidence available which allows for reasonable speculation.   Peterson has described a childhood that included physical punishment from the more violent end of the tough love parenting philosophy. Nevertheless, he attributes his success as an athlete to some degree to his strict upbringing.  He is not the only athlete (or other notable person) to credit tough parenting for his success. How many kids who escaped the gangs of their neighborhood believe they did so because of one or more parents who believed in corporal punishment to some degree?

When Peterson’s father sent him out to find the tree branch with which he would be beaten, it suggests a methodology – and one which was common in the neighborhood.  Was the ritual sadistic or merely part of a shared understanding that this is the right way to bring up a child.  Like it or not, the discipline seems to be part of an understood protocol and not the result of a sudden or drunken blind rage.   There are plenty of Christian communities that continue to adhere to Proverbs 13: 24: “he that spareth his rod hateth his son.”  Regretfully, the degree to which the rod is to be applied is not specified in the Proverb.

In this context, it is possible to be appalled by the results of Peterson’s implementation of “the switch” while simultaneously taking him at his word.  So it is not necessarily ironic that Adrian Peterson’s The All Day Foundation has been raising money to fight child abuse since 2013.  His father serves as president of the charitable organization.  It is hard to imagine that either of them believe they are child abusers.

While it appears that Peterson may be guilty of a crime at some level, there is a political aspect to this topic as well. Whatever our attitude regarding corporal punishment, how much do we want government involved in how we raise our children?  Where do personal and religious beliefs supersede the state’s interest in protecting the vulnerable? As a component in the ongoing culture wars, we continue to struggle with the answer to this question

Finally, while the visual evidence of the beating has been publicized, Peterson has not been convicted of a crime.  In a legal sense, only the government has the obligation to abide by the “innocent until proven guilty” maxim.  Employers, even those in special categories such as sports franchise and leagues, are free to fire employees because they have been indicted for crimes.  Yet the man on the street still subscribes to a residual sense of fairness with regard to this sort of justice.  Peterson probably committed a crime, but he has not been found guilty by a court of law.

Since Peterson is unlikely to go to trial until 2015, the Vikings and the NFL face a tough balancing act.  And like it or not, the NFL is a reflection of society that lives vicariously through it and other entertainment options.  Cynicism is a reasonable response to this mess, but it should not preclude the possibility that some good can come from it.