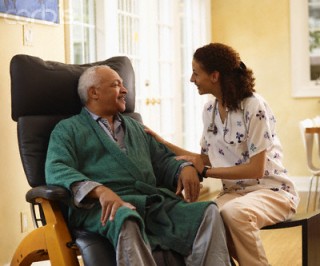 The new rules would extend the Federal minimum wages of $7.25 an hour and were scheduled to go into effect Jan 1, 2015.  Once the rules are implemented, home care workers would also receive time-and-a-half overtime pay when they work over 40 hours a week. The new rule, whenever it really goes into effect, will also apply to most third-party entities that provide non-medical companionship services.

That Federal minimum wage, by the way, translates to about $15,000 a year gross salary. That’s $9,000 below the federal poverty line if you’re supporting  a household of four.

Unfortunately, paying home care workers even a modicum living wage was not seen as a slam dunk by everyone.  No sooner had the Department of Labor announced the final rule change than home-care industry officials complained that the new rule would increase costs and price home care out of the market.  They warned that more old people would be forced into nursing homes.  A number of states, including Illinois, expressed concern over increased Medicaid costs.

As a result, the Department of Labor announced on Oct 7 that it would not begin enforcing the rule as scheduled on Jan 1, 2015. Furthermore, it would exercise its discretion for the period from July 1 to December 31, 2105. That language means the DOL doesn’t plan to bring any enforcement action until at least 2016.

It is worth noting that the 2013 announcement of the “new final rule” followed the six month public comment period through which government agencies are required to vet any proposed rule changes.  So any enforcement initiative to assure home care workers a more decent wage will get underway with years long delays already embedded. Undoubtedly some of these objections are honest and some are self-serving, but it is a curious system that can’t function without the exploitation of low wage workers.

This may not be precisely what William Gladstone had in mind when he said “Justice Delayed is Justice Denied,” but it’s close.