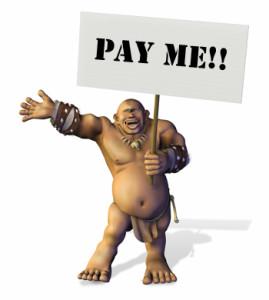 In a typical scenario, the NPE contacts a legitimate business with a demand letter claiming infringement of questionable Patent A (let’s say Patent A is a business method patent that applies to any business using doors to enter their building). The targeted business is given the choice of settling for a “licensing fee” or facing a lawsuit. The NPE model works because it costs a lot of money for a legitimate business to defend itself in court, whether the lawsuit has merit or not. Since most NPE’s have neither offices nor employees, it costs them very little to bring the legal action.  Most patent troll lawyers work on a contingency fee basis. For companies fighting these threats, legal expenses can climb into the millions – as many have found out to their dismay. Some have chosen to fight on principle and eventually “won”, while going bankrupt in the process.

There is a real cost to society associated with the activities of patent trolls.  Beyond the cost of paying out what amounts to protection money, fear of patent trolling discourages legitimate innovation in the marketplace and slows job creation. Once limited to mostly technology and software companies, trolls now send blanket demand letters to retailers, restaurants, hotels and all kinds of other main street businesses. In some cases, they do damage to people far removed from the original suit, such as members of credit unions who are targeted with blanket demand letters for use of standard financial technology. If the credit union settles, the money comes out of the pockets of its members.

Since the chances of appealing to a patent troll’s better nature are similar to those of convincing a hyena to go vegetarian, it finally become obvious that regulation needed to be initiated.   Individual states, including Illinois, began implementing patent troll reform laws in 2014. The synopsis of Illinois SB 3405 reads: “Amends the Consumer Fraud and Deceptive Business Practices Act. Provides that it is an unlawful practice to claim that another has infringed upon a United States patent if the claim falsely threatens adverse administrative or judicial action, the assertions lack a reasonable basis in fact or law, the person making the assertion is not, or does not represent, a person with a current right to license the patent, or the claim fails to make certain other disclosures. Effective January 1, 2015.” [Read the Amendment Here]

At this point, a total of 28 states have passed or are about to pass similar legislation.

In addition, the Supreme Court has weighed in on some key patent trolling issues, in the process invoking a small portion their supreme wisdom on the side of good. In a 2013 decision, the Court made it easier for defendants to force NPE’s to pay attorney’s fees. This ruling makes actual lawsuits riskier for the trolls, and trolls hate risk because it costs them money. In a potentially huge 2014 ruling (Alice Corporation v CLS Bank), the Court essentially negated the definition of which types of inventions can be protected. The shakeout of this decision is still being assessed.

However, the fact that patent troll activity is a national problem means that only federal legislation will have the heft to bring this practice to a halt. The good news is that Congressional legislation aimed directly at corrupt NPE practices  was introduced in February of this year. Having accumulated 26 co-sponsors, HR 9 “The Innovation Act” will discourage patent trollers by requiring them to provide more specific information in demand letters. If passed, these restrictions will make it more difficult for trolls to mail out blanket threats. It’s a start/

The bad news is that nothing seems to go smoothly in Washington, DC and the Act appears to be stalled. Whether you own a business or in your capacity as a citizen, I believe this would be a good time for your Congressman and Senator to hear from you in support of HR 9.

Who knows: you might be the next patent troll victim.