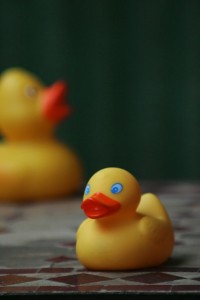 After hiring a new employee, Acme Corp. spends months training Louie Duck for the position. He learns how Acme delivers a Rocket-Powered Unicycle only seconds after an order is dropped in a remote mailbox. He learns the secret of making both Earthquake Pills and Dehydrated Boulders. Mr. Duck even learns how the company thrives in the face of what must be a legion of product liability lawsuits.

And just when Acme feels that Mr. Duck is beginning to contribute to its bottom line, he quits. Not only does he quit, but he starts his own company, Ajax Corp., that sells products that are remarkably similar to Acme’s Jet-Propelled Tennis Shoes and Do-It Yourself Tornado Kits. And on his way out, Mr. Duck also convinces Acme’s best customers, one Mr. Coyote, to send all of his future business his way.

Lucky for Acme, Mr. Duck signed a noncompete agreement when he was hired. The agreement barred him from working in a similar company or from starting a similar business for a minimum of five years. Acme thinks it should have no trouble in shutting down its new competitor. But if Acme takes the case to court, it may find that the agreement is not worth the paper it was written on, depending on where the case is heard.

In California, Acme is probably out of luck. In Florida or Texas, Ajax likely would have to shut down. Under Illinois law, the case could go either way.

The use of noncompete provisions in employment contracts is increasing. Initially, the provisions were used mainly by technology companies and corporations with closely held secrets. People in sales were (and are) often asked to sign an agreement that restricts them from doing business with the employer’s customers for a certain length of time after termination.

Now, employers insert noncompete provisions into all types of employment contracts. According to the New York Times, a Massachusetts man whose job was to spray pesticides on lawns had to sign a two-year noncompete agreement. A woman seeking an entry-level social media job at a marketing firm had to sign a one-year agreement. And a 19-year-old college student was denied employment as a camp counselor because of a noncompete agreement she had signed the previous year with a rival camp.

In Massachusetts, Gov. Deval Patrick has proposed legislation that would ban nearly all noncompete agreements. California already bans them in almost all circumstances, as does North Dakota. Texas and Florida, however, place very few restrictions on their use. Proponents of banning the agreements say that noncompetes hurt the economy by decreasing worker mobility and stifling startups. Opponents of the ban say the government should not interfere in contractual matters. “It should be up to the individual employer and the individual potential employee.…” said Michael Rodrigues, a Massachusetts state senator.

But what possible justification could a lawn-care company have for requiring a noncompete agreement for a person who sprays poison on grass?  In that case, the noncompete provision looks like a way to force employees to stay on the job. The owner of the camp that required counselors to sign a noncompete agreement admitted that keeping employees was the reason for using the provision. “Our intellectual property is the training and fostering of our counselors, which makes for our unique environment,” he said. “It’s much like a tech firm with designers who developed chips: You don’t want those people walking out the door.”

Acme, on the other hand, has ample justification for its noncompete agreement. The method of making Building Disintegrators and the ingredients for Triple-Strength Fortified Leg Muscle Vitamins are important trade secrets, vital to the company’s success. Mr. Duck obviously should not be allowed to profit from Acme’s expertise.