Who Gets To Keep The Ring When A Betrothal Goes South? 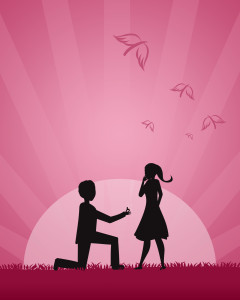 In these modern times, it is not enough for a young man to get down on one knee and ask the woman of his dreams for her hand in marriage. The expectation today seems to require an over the top public spectacle, perhaps involving a giant screen at a ballpark or a Harry Potter themed set piece posted to social media. A massive waste of money or time is always considered an appropriate supplementary feature for this sort of enterprise.

While public displays of narcissism may be consistent with the modern Zeitgeist, the one thing they don’t accomplish is ensuring that the engaged parties remain engaged. Indeed, the marriage proposal experience may turn out to be the high point of the relationship. Those who keep track of such statistics claim that anywhere from 15% to 25% of twenty-first century engagements are broken before the wedding. While no one knows the statistics for sure, the numbers are high enough to keep websites such as www.idonowidont.com. The site not only provides an online aftermarket for reselling disrupted nuptial jewelry, it also includes the founder’s sad tale of his own broken engagement as inspiration for his business model.

Which segues nicely into today’s topic: what happens to the engagement ring when the big day is called off? Does the woman get to keep and possibly sell it if the man backs out of the agreement? Does she need to return it to the man if she decides to forego the walk down the aisle? And are there circumstances which would complicate the matter further, such as terminating the engagement for cause?

In simpler times, it was generally understood that the woman would return the engagement ring. In 1922, the estimable Emily Post* decreed that the prospective bride should return the ring regardless of the circumstances of the breakup. It was and to some degree still is considered the proper thing to do.

But while custom and tradition may deem returning the ring to be the correct standard of behavior, the legal landscape has changed with the changing times. In a society that seems at once both more acquisitive and more litigious, the legal standard for ring returns has become more complex. Today, the protocol for who gets the ring is determined by state law, and there is some variation in how individual state courts perceive the topic.

Courts generally treat an engagement ring as a gift from the donor (normally the male) to the donee (normally the female). To be considered a legal gift, three provisions must be fulfilled: the donor must intend to give the ring as a gift, the donor must deliver it the donee, and the donee must accept the item. If the person to whom the ring was given can demonstrate all three elements, the court will consider the ring to be a gift. The crucial question is whether or not the gift is conditional, that is, is it a form of contract contingent upon the marriage taking place. In most states around the country, the answer is yes. With one exception, state courts find that the gift of an engagement ring incorporates an implied condition of marriage. The mere acceptance of the gift is not part of the contract.

Illinois is a relatively straightforward state when it comes to this question. An engagement ring is viewed as a gift in contemplation of marriage:

“…a gift given in contemplation of marriage is deemed to be conditional on the subsequent marriage of the parties, and the party who fails to perform on the condition of the gift has no right to property acquired under such pretenses.”

Because the gift is conditional on the eventual marriage of the parties, the party who fails to perform has no right to the property in Illinois. If the bride-to-be breaks off the engagement, the ring is returned to the man. However, if the man breaks off the relationship, the woman may keep the ring because it was not her fault that the condition was not met. In cases in which the engagement is broken off by mutual agreement, the ring is to be returned to the donor…the erstwhile groom.

While there have been Illinois cases in which the plaintiff’s lawyers argued that the woman had cancelled the wedding for cause – usually infidelity – Illinois courts have upheld the no-fault component of the law. The ring goes back to the man.

Among other states, the slow-motion trend is toward an even more streamlined no-fault interpretation of the engagement contract. In this legal scenario, the ring is returned to the man even if he breaks off the engagement. The no fault rule is now the standard in about 20 states.

Conversely, states such as Texas retain the “fault” component in the legal mix. This additional factor contributes more uncertainty to a situation already fraught with drama and leaves more interpretation to the court. The engagement ring is still considered a conditional gift, but the reason for the breakup can be considered an extenuating circumstance. When this Pandora’s can of worms is opened in court, it is possible for the donee/bride to keep the ring if the donor/groom causes her to terminate the relationship by his behavior. For example, if he suddenly demands an onerous pre-nuptial agreement or is caught in an unfortunate error in judgment at his bachelor party, the bride might be awarded the ring even though she broke off the engagement. In these sort of he-said- she-said situations, the verdict could go either way.

Montana’s legal position on engagement rings as gifts is unique among the states, in that they consider the ring an absolute gift, period. The abolition of the state’s breach of promise laws disallowed legal action to recover the ring. The bride can retain the ring as a keepsake if she so desires, or even sell it on www.idonowidont.com for a fair profit.

So if you’re contemplating an engagement, make sure to check your state law before you book the video crew for the marriage proposal. If you’re the prospective groom, you live in Montana, and you don’t have total confidence in the donee, you might want to move.

A better outcome is that you find your true soul mate, have a great wedding and live happily ever after.

* Etiquette in Society, in Business, in Politics and at Home Chapter XX  Funk and Wagnalls 1922.