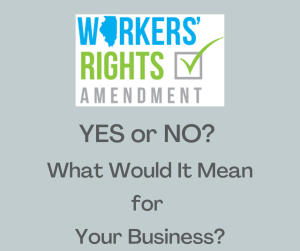 What should small business owners want to know about this, and how would it affect them?  Here are some Q’s and A’s to give you some insight.

Q: What does the Amendment actually say?

A: Amendment 1 would add to Article I of the state constitution the following language:

(a) Employees shall have the fundamental right to organize and to bargain collectively through representatives of their own choosing for the purpose of negotiating wages, hours, and working conditions, and to protect their economic welfare and safety at work. No law shall be passed that interferes with, negates, or diminishes the right of employees to organize and bargain collectively over their wages, hours, and other terms and conditions of employment and work place safety, including any law or ordinance that prohibits the execution or application of agreements between employers and labor organizations that represent employees requiring membership in an organization as a condition of employment.

(b) The provisions of this Section are controlling over those of Section 6 of Article VII.

Q: Who supports the amendment, and who opposes it?
A: Ballotpedia counts State Senator Ram Villivalam, State Representatives Marcus Evans and Lance Yednock (all Democrats) and (no surprise) several labor unions as key supporters of the legislation.  Governor JB Pritzker is also on record as supporting it.  Opponents include Pritzker’s gubernatorial opponent, State Senator Darren Bailey, as well as Republican State Representative Blaine Wilhour, the Illinois Republican Party, and several industry and trade groups, including the Illinois Chamber of Commerce, Illinois Manufacturers Association, and National Federation of Independent Business.

Q: What are some key arguments for and against?
A: During a recent gubernatorial debate, Pritzker was asked why the amendment is needed given that the National Labor Relations Act protects collective bargaining at the federal level, and he responded the corporate power far exceeds that of individuals, reported the Springfield Journal-Register. “Workers ought to be able to get together and go in together to try to get a better wage, a safer workplace, and benefits,” he said.   “The data shows that the Workers’ Rights Amendment would protect Illinois’ competitive advantage for essential workers,” Frank Manzo IV, executive director for the Illinois Economic Policy Institute and the co-author of a recent report on the topic along with University of Illinois Professor Robert Bruno, told WBEZ-FM. “Construction workers, police officers, first responders, teachers, registered nurses all earn between 5% and 35% more in Illinois, and they’re also more likely to have health insurance and to own their homes in Illinois.”  Right-to-work laws, he added, “lower incomes and produce worse health outcomes without benefiting the economy.”  And in a subsequent Chicago Sun-Times editorial, he added that a well-compensated workforce strengthens the state’s finances and is good overall for public budgets.

The counterargument, from the similarly named but ideologically opposite Illinois Policy Institute, which led an unsuccessful legal challenge to keep the provision off the ballot: “Amendment 1 would solidify Illinois’ reputation as one of the worst places to do business in the country. Illinois would become the only state to decree union powers as untouchable, putting the weight of the Illinois Constitution behind union bosses’ abilities to strike over a virtually limitless list of demands, the ability to override state law through their contracts, and a guarantee that taxpayers and lawmakers would have an extremely difficult time reversing course. The cost of filling those demands would fall on the businesses and families paying taxes.”

Bailey reflected this argument during the gubernatorial debate, saying, “My message is this: Unions, stay in your lane, and everything will be fine. Leave mom-and-pop private business alone.”

And Todd Maisch, president and CEO of the Illinois Chamber of Commerce, said most of what the amendment does is, in fact, protected in federal law—and that the prohibition against right-to-work will cause more businesses to leave for states like Iowa and Indiana, the Journal-Register reported.

Q: How would the Illinois Constitution compare to those of other states?
A: Hawaii, Missouri and New York all constitutionally protect the right to collective bargaining, although no other state prohibits right-to-work laws, according to Ballotpedia.

We have been advising and assisting Illinois Small Business Owners for 50 years.   The Amendment should not adversely affect Illinois Small Business Owners because small businesses owners do not face unionization of their workforce.  Every larger business faces the possibility of unionization of the work force, but this is more of a political issue rather than a practical problem.