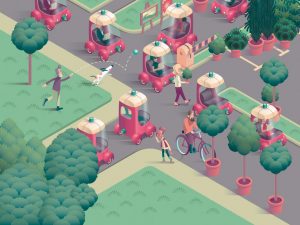 Any business that will contribute to the production of driverless vehicles must give serious thought to the risk of products-liability lawsuits. And that includes suppliers, even of minor parts. We may think of driverless cars as a phenomenon of the future, but that future is closer than you think.

“Driverless car” is generally defined as a vehicle which, for most of a journey, will take charge of steering, accelerating, indicating, and braking. For the near future, the technology is intended only to assist the driver, not to replace him. It is expected that the driver will be able to take control of the “driverless” vehicle at any time.

Aircraft have been guiding themselves along airways with little or no input from the pilot for a long time.  But obviously the crowded highway is a very different environment, requiring quickly-responsive, precision technology.  That technology, however, is here right now –cruise-control, automatic braking, anti-lane drift, self-parking functions.   There is GPS data from satellites. And of course, the ultrasonic sensors at grocery stores, politely opening the door for us as we walk to the entrance.

It is not only do-able; it is already being done.  Test vehicles have been tried in the UK. Volvo has tested 100 driverless cars in Sweden. In 2013, Nissan carried out Japan’s first public road test of an autonomous vehicle on a highway. New Zealand is even experimenting with driverless buses.

The U.S. is not lagging behind. California, Nevada and Florida have given their approval for testing driverless cars on the highways. In California alone, Google’s driverless car has traversed more than 300,000 miles of the open road.

Be assured, you will see, riding atop this tide of technological innovation, a flood of product-liability lawsuits. But it isn’t just the end-product suppliers who face this hazard. Component part manufacturers are equally at risk. Ironically, the past has made it clear that devices intended for safety can be a big source of liability.  Passive restraints themselves have been the cause of injury. Airbags have been fatal to children; they have cause sternum and rib fractures, even cardiac trauma, to drivers.

How can manufacturers protect themselves? The answer to that question will require some innovation itself. Historically, written warnings which accompany a product have offered some protection against liability. But what kind of warnings will suffice in this brave new world of driverless vehicles??  Manuals filled with warnings and instructions will probably not be adequate to the task of educating the consumer. Actual training of the consumer, before he operates the vehicle, may be required.

And there remains the problem of real-time warnings –warnings adequate to preventing a collision at that imminent moment.  What sort of driver-alerts can fulfill the need?

Though many of these questions are not answerable at this time, this much is certain: suppliers in the chain for the manufacture of driverless vehicles need to think about how to protect themselves from product liability lawsuits.