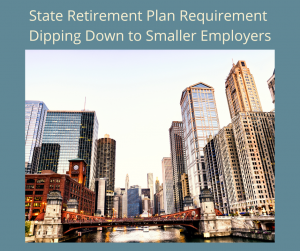 Small businesses with 16 to 24 employees that have been operational for at least two years and don’t already offer qualifying retirement plans will, as of November 1, 2023 be subject to the requirements of the Illinois Secure Choice Savings Program Act.

Under an amendment passed last year, those with 5 to 15 employees must participate in the act—which has created a state-sponsored retirement savings program to boost access for private-sector employees—as of November 1, 2023.

END_OF_DOCUMENT_TOKEN_TO_BE_REPLACED

When the Americans With Disabilities Act passed in 1990, the World Wide Web was only a year old and was not even a commonly used term yet, much less a commonly used medium. Although the ADA is most commonly associated with the inclusion of wheelchair ramps, elevators and handrails in public buildings, three decades later the law is also being used to demand that business websites become ADA-compliant.

The law firm Seyfarth Shaw tallied more than 2,250 such federal suits filed in 2018 under Title III of the ADA, more than triple the number from the year before, alleging violations because plaintiffs “could not use websites because they were not coded to work with assistive technologies like screen readers,” the firm said.    Advocates for the disabled say that websites must accessible to everyone, just like brick-and-mortar stores, restaurants and schools—with content coded to enable screen-reading software to convert words to an audio translation for the blind, video that includes written descriptions for the deaf, and interactive functions operable through keyboard commands for those who cannot operate a mouse.

It can cost several thousand to a few million dollars to make a site accessible depending on its complexity, although adding to the confusion is the fact that no formal government standards have been promulgated—and the Trump administration has decided to stop drafting rules for website ADA compliance, which many people are saying is to blame for the rise in lawsuits. A consortium of web innovators has created the Web Content Accessibility Guidelines.